A career in the aerospace industry with vision aimed toward interplanetary travel has resulted in the development of a mobile oil and gas separator capable of ending the ongoing issue of setting fire to the natural gas associated with the hydraulic fracturing process.

The Denver Business Journal recently featured Robert Zubrin, founder of Pioneer Energy Inc., who has developed the Mobile Alkane Gas Separator (MAGS) which could possibly eliminate the need to burn, or flare, natural gas from oil and gas wells.

The drilling process and the resources being collected are a mixture of liquid crude oil and natural gas. The liquids are easily stored and transported, but for operations miles away from pipelines and refineries, igniting the lower priced natural gas and allowing it to burn off into the atmosphere is often the more economically viable option.

The MAGS system is highly mobile, being towed on a tractor trailer, making the capture of natural gas a possibility for oil and gas wells located in remote areas. The system, in development since April 2013, has the capability to capture natural gas from a well, compress it, and separate any included moisture while breaking what is captured into three different parts: natural gas liquids (which can be stored and transported to market), dry methane (which can be used in field generators, replacing diesel fuel), and ethane (which powers the MAGS system).

Cathy Proctor for the Denver Business Journal reports: "Zubrin figures that his system, running on a remote well in the Denver-Julesburg (DJ) Basin north and east of Denver, could take in about 300,000 cubic feet of natural gas per day and generate enough methane to replace about $7,000 worth of diesel fuel per day. And, as a bonus, the system also would produce about 1,200 gallons of natural gas liquids for sale to the market, he said."

Earlier this year North Dakota state officials approved new regulations aimed to reduce the amount of natural gas flaring in the Bakken oil fields. Zurbin has already received interest from multiple oil and gas companies, and as soon as Pioneer Energy Inc. begins to receive more orders, the company plans to contract with another company that’s able to mass produce the system.

The MAGS field unit is capable of processing 200 Mcf of raw natural gas per day. Utilizing a NGL-rich composition typical of many Bakken sites, will be able to refine the raw feed into enough methane to produce 450 kWe of electrical power and 1,700 gallons of natural gas liquids per day. (Photo courtesy of Pioneer Energy Inc.) 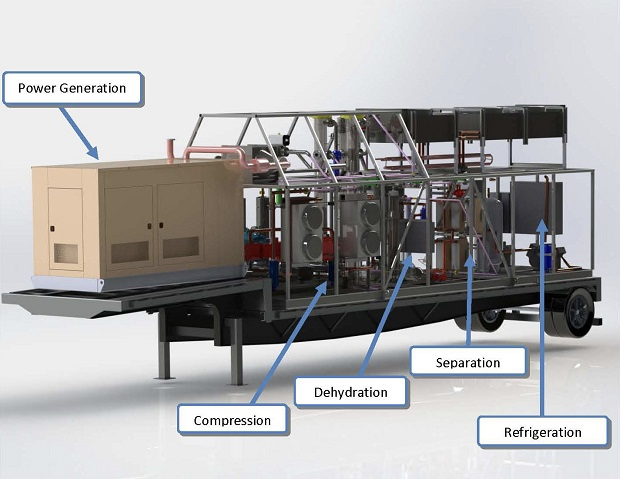 Fig. 2. The Mobile Alkane Gas Separator (MAGS) The process employed by MAGS is shown in block diagram form in Fig. 1. Raw natural gas is first compressed and then dehydrated. The dry compressed gas is then refrigerated down to very cold temperatures, causing the high molecular weight natural gas components to liquefy. A miniature distillation column system is then employed to separate the natural gas mixture into three streams. One stream, composed almost entirely of methane with a small amount of ethane is sent off to power generators to provide electricity for either local use or sale to the grid. Another, composed primarily of ethane, is sent to the MAGS internal power generator to support its own operation. The third, composed of natural gas liquids including propane, butane, pentane, and hexane, is stored as a liquid so that it can be transported to market for sale.