LAKEWOOD — A Lakewood company has found a way to capture a byproduct of the booming energy economy — natural gas flared at remote oil well sites.

Robert Zubrin, the founder and president of Lakewood-based Pioneer Energy, has guided a team in designing the Mobile Alkane Gas Separator. The unit captures the waste byproduct of drilling with hopes of putting a dent in the 270-290 million tons of CO2 emissions produced worldwide every year from gas flaring while also turning a profit.

On federal lands in Colorado, operators have incinerated roughly $36 million in potential tax revenues since 2009. according to the advocacy organization Western Values Project.

"That doesn't even count gas being flared on public and private land," said director Ross Lane. "The amount of gas wasted is staggering, and this is happening while states struggle to balance their budgets and many families can't heat their homes in winter."

Zubrin said natural gas — which has been selling at relatively low costs — is flared because building pipelines to remote well sites is cost prohibitive or simply lags behind the rapid development of new wells. The mass incineration of the natural gas has drawn scrutiny from a wide range of stakeholders.

"This is a significant step forward and a significant resource for America," Zubrin said. "We anticipate exporting these to be used in other parts of the world, especially in less developed areas with little or no infrastructure."

In two weeks, the first MAGS unit will be sent to North Dakota for full field operations with initial plans focused there and Colorado.

States, even ones with robust oil and gas economies, are starting to pass industry regulations curbing emissions. Conservative estimates show U.S taxpayers stand to lose $800 million in tax revenue over the next decade as $1 billion in market value natural gas is sent up in flames every year.

Rolled onto a well site on a flatbed truck, the MAGS captures wet flare gas that's a mixture of methane, ethane, propane, butane and pentane.

The machine takes the gas from a well, compresses it, removes the water and cools it to minus 70 centigrade so that it splits into three streams. The propane, butane and pentane are liquefied, tanked and shipped to market.

Meanwhile, the dried methane gas can then be used on site for well operations as a replacement for pricier diesel fuel. The final stream is ethane, which powers a generator that runs the MAGS unit.

"The thing that's different and unique with these guys is they can strip everything from C3 on up and fractionate this gas and use part of the byproducts as fuel for the operation," said Doug Colby, senior operations engineer for Whiting Petroleum Corporation. "I personally like it, think it has great potential and am looking forward to getting one of these things in the field."

After a career in the aerospace industry, Zubrin said he jumped into the energy sector after the 9/11 attacks to do his part in helping the country gain energy independence.

"Ultimately, resources are created by invention," Zubrin said. "Oil was not a resource by itself until people invented engines that run on it. Uranium wasn't useful until we invented nuclear power. Flare gas is not a resource today, but it will be." 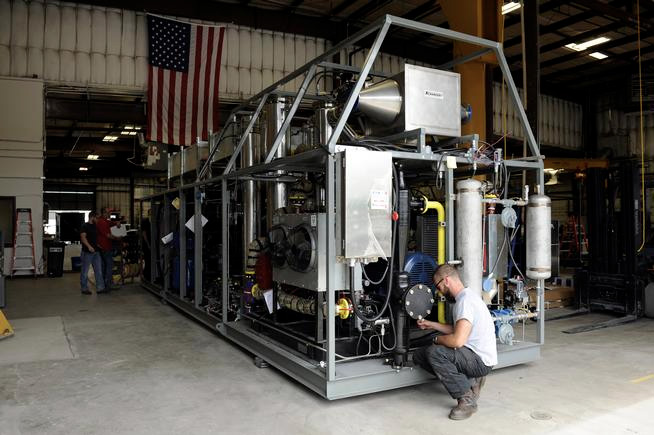 Kevin Young, a field technician with Pioneer Energy, works on the MAGS machine on Aug. 20, 2014, in Lakewood. (Anya Semenoff, Your Hub)